I memorized this passage in preparation for my second baptism. 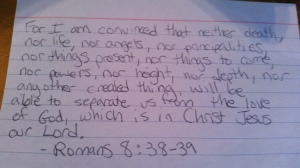 For my first baptism, I was eight years old.  I became afraid of hell, so I asked Jesus into my heart one night.  The logistics of that baptism where complicated.  My mom grew up Baptist and my dad was an adult convert.  We were attending a Presbyterian (EPC) church that primary baptized infants.  My parents thought of this as a minor doctrinal disagreement and stayed involved in the church, even though they disagreed and considered a “submersion believer baptism” to be very important.  When I became saved, my family insisted on accommodating a proper baptism, so the church bought a horse trough, so I could have the first submersive baptism.

A year later, we moved to a new city and ended up in another EPC church.  The denomination’s motto is “In Essentials, Unity. In Non-Essentials, Liberty. In All Things, Charity,” so my family still thought it was no big deal that the church baptized babies, while they believed that baptism should happen when one is old enough to accept Jesus. We stayed at that church all through high school, so that church community became another family to me.  I got involved in the youth group during middle school and high school, going on mission trips and even joining the leadership team of the group.  Eventually, my church started offering baptism to adults and “big kids” as a demonstration of reaffirming one’s faith.  Once a year, the whole congregation would meet at a state park on a Sunday afternoon in August for a potluck, water skiing and a baptism ceremony in the reservoir.  My senior year of high school, several of the more popular girls decided to get baptized, so I joined in.  There were required classes to attend in order to participate in the baptism.  Since we all decided last minute, they threw together an extra classes just for us with a video of the Pastor’s presentation. We each had to select a scripture to memorize and recite at the ceremony.

My second baptism was an act of rebellion.  I was rejecting my mom’s religion.  When my parents asked why I felt called to be baptized now, I would say that I was doing it, now that I was old enough to be a believer “for real.” I was passive aggressively denying the legitimacy of my childhood conversion.  I was coming out as a Calivnist and showing that I embraced the teachings of my church over those of my parents.  I had not made a free will decision to follow Jesus as an elementary schooler; He had providentially chosen me.

Baptism day arrived in August.   We were supposed to wear white clothing.  I had planned on a white shirt and grey shorts over a yellow swimsuit.  I woke up to find that my period had just started.  I was 17 and being fairly repressed and lacking in anatomy knowledge, I had never successfully used a tampon before.  This baptism was the push I needed.  I had to stay home through the morning church service just to have time to psych myself up to insert a tampon for the first time.

I made it in time for the picnic and when my turn came, I stated my chosen bible verse, then got dunked in reservoir water and managed to get washed in the Blood without inadvertently getting washed in my own menstrual blood.

At that time, I was recovering from some depression and anxiety.  It was the last month of the pre-9/11 world.  I was looking forward to applying to Christian colleges. I was lonely and socially awkward which gave me lots of time to dialog with Jesus in my head. I really was convinced that nothing could separate me from my close relationship with the Lord.  He was the one I would turn for everything and I planned to sacrifice anything to serve him with my life.